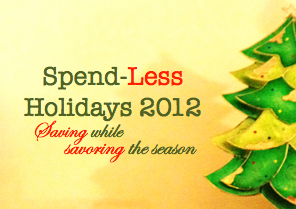 ”I’m participating in the Spend-Less Holidays: Saving While Savoring the Season Blog Carnival, hosted by The Frugal Fil-Am and Dainty Mom. We’ll be sharing our tips on how to spend less this holiday season, so that we can have a more meaningful Christmas. Please scroll down to the end of the post to see the list of carnival entries.”

Early mornings are getting nippier and nights are getting longer – only means one thing, it’s beginning to feel like Christmas! 🙂

The Philippines has earned the distinction of celebrating the longest Christmas season.  You can already hear Christmas songs being played on the radio as early as September, and decors are starting to be put up early November.  These festivities last until Epiphany or even up to the feast of the Black Nazarene on January 9 the following year.

Talk about being in the Christmas mood for more than 4 months! 🙂

This gets me in a sentimental mode and I can’t help but reminisce Christmases past and the traditions we observe yearly.

1. Christmas tree – we haul this out of the storage area usually on the last weekend of November, air it out and put it up with the youngest member of the family (Lian, of course) placing the star on top.  We had our tree for more than 5 years already and Lian’s pestering me to buy a pink new one.  We finally made a compromise and we will put up the same tree but have pink decor.

Trees are aplenty in departments stores. Head to the one nearest you.  I’m pretty sure you’ll find something that will match your preference, size, color.  Talking about colors, I remember Dimensione offering pink, white, blue trees couple of years back.  Hmm…better check if they’ll offer them this year (will go but not with the lil girl hehe)

2. Simbang Gabi (Night Mass) – it’s actually an early morning mass celebrated for 9 consecutive days/ nights beginning December 16.  But since churches now offer anticipated masses, it has become popular to the young set.  I’ve actually completed this only twice in my lifetime.  It’s a belief that if you complete the 9 masses, your wish/ prayer intention will be granted.  Let’s just say that my life turned for the better twice after completing the masses.  But looking at it more closely, as long as you pray hard and you showed devotion, God will definitely hear you and show you His way.

3. Bibingka and Puto Bumbong with Hot Tsokolate (Rice cake and Sticky Purple Rice delicacy with Hot Chocolate) – these are staples after attending Simbang Gabi.  You cannot say you’ve heard mass without partaking of either of these delicacies outside the church or patio.  I can remember that when I was a kid, they are priced at PhP5, now if I’m not mistaken, they are sold at PhP30!  Of course, for those who have year-round cravings, Via Mare has the best bibingka in town 🙂

4. Caroling – I have never participated in one (I wonder why not? haha) but our house was a regular stopover for carolers.  Carolers are usually a group of children who go house to house singing popular Christmas songs accompanied by simple DIY instruments like softdrinks crowns as tambourine.  After singing their hearts out, they expect that you reward them with coins.  Mind you, if you give them only a couple, you’ll be branded as “barat”!

5. Lanterns – you’ll know it’s Christmas when “parols” are hang outside the houses.  These are star-shaped lanterns made of paper or capiz (popular nowadays).  We usually hang ours on December 16, the official start of our family Christmas as this is the birthday of my Dad and Mom.  So even if they’re already gone already, we still keep this tradition.

Pampanga has the most extensive collection of lanterns.  You imagining it, they’ve done it! Price ranges from PhP1,000 for a simple lighted one to as high as PhP15,000 for those huge, elaborate ones that you would be just too happy to hang on your windowsill 🙂

These are just a few of our family’s traditions.  What makes them meaningful for me is because we do it together as a family. Christmas is not spending a whole lot of moolah, but spending a lot of time doing what you love to do with your loved ones.  It’s the sharing of one’s self that is priceless – something that you can’t just buy off the store.

Of course, the shallow me would say that Christmas won’t be the same without the decors, the gifts, the new clothes,  etc.  And yes, they’re part of it.  But let’s not forget the “Christ” in Christmas – the main character of the season.  He was born in simple surroundings, raised as a simple man but did extraordinary things.  So we can live the same way – no extra fuss but with extra results 🙂

Check out the rest of our Spend-Less Christmas Carnival participants…and get inspired this season.

2 thoughts on “Thinking About Christmas”